The Cabinet Secretary for Environment and Forestry, Keriako Tobiko on 25th July 2022 at the NEMA headquarters inaugurated the NEMA board of management which was recently fully constituted.

CS Tobiko challenged the board members to undertake the Authority’s coordination role fearlessly to ensure the mandate is achieved.  He urged them to see challenges as opportunities and capitalize on its leadership to achieve the desired outcome for Kenyans.

"Despite expected government transition, the environment remains. It does not discriminate.  It affects all despite the political affiliation". The CS said as he exuded confidene that the next government will build on successes acheived by the current government on environment. 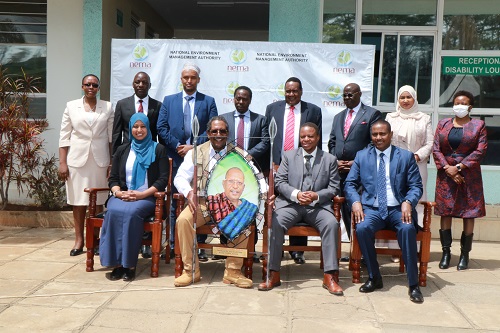 The CS stated that the globe is currently facing the worst environmental challenges among them climate change and biodiversity loss as a result of environmental destruction and degradation. He added that pollution has reached unprecedented levels threatening the very human existence.

“We have exceeded the ecological limit of 1.6 meaning that we are already eating into the future of our children. Hence, we need to protect the environment by all means to create the regenerative capacity of the earth,” the CS added.  “The question that each one us needs to ask is what difference have I made while in office,” CS Tobiko challenged the board members to go beyond and work for betterment of the environment.

He thanked for their effort for conserving the environment especially implementation of the ban on plastics. Due to these efforts, the Authority has been recognised globally with the recent award of the Authority as the continental regulator of the year. The NEMA Director General, Mamo B. Mamo was also awarded as the prestigious Africa Public Sector CEO of the Year in Accra, Ghana during the 3rd Africa Public Sector Conference.

CS Tobiko congratulated the new team for the appointment into the NEMA board. He expressed optimism that the new board will add value to the Authority. He particularly asked the new board chairman, Mr. Eric Mungai to steer the performance of the Authority to desirable levels. 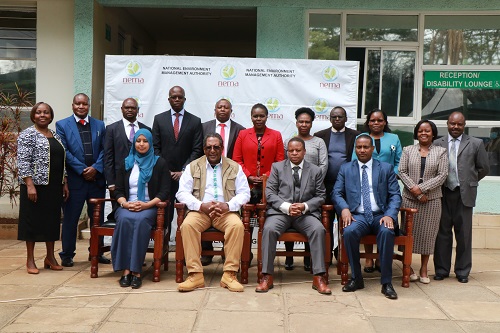 The NEMA Chairman, Mr. Eric Mungai appreciated the work the Authority has been undertaking in its coordinative role on environmental matters in the country. He added that the Authority will focus on sensitizing the public on environmental conservation to ensure that people do the right thing by protecting their own surrounding. “We would like to try and leave the world a better place than we found it.

The NEMA Director General, Mamo B. Mamo enumerated some of the key Authority’s achievements for the last two years such as the implementation of the plastic bags ban which is at 92%. The DG added that since the ban on plastics, Kenya has received 14 countries worldwide to benchmark with the country’s successful implementation of the ban.

The DG added that the Authority has enhanced its regulatory role by automatic its processes. For instance, due to automation of the processes, the Authority has been able to process 2,373 high risk projects, 27,528 medium risk projects and 8,814 Summary Risk Projects which is done within 5 days. The Authority has also harnessed the international funding related to climate change and other environmental initiatives such as Green Climate Fund, Adaptation Fund, African Environmental Health & Pollution Management Programme (AEHPMP)-World Bank among others.